Gyanmitra Saraswati is the co-founder of the social enterprise SWAN Foundation for ayurveda and yoga research, The SWAN Yoga Retreat Goa and Yoga Retreats Ibiza. Through these organisations he is engaged in various activities to promote the traditional knowledge of yoga, ayurveda and tantra by conducting need- based programs to help the people who need it the most. 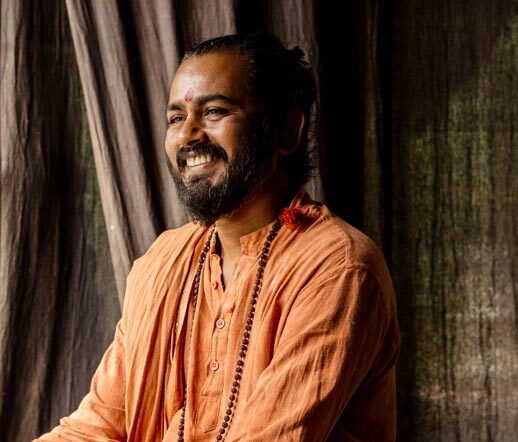 Gyanmitra was introduced to yoga at a very early stage in his life, it used to be a sports activity in the school as part of the physical training in the Indian school system at that time. As a youngster he got interested in reading books of masters such as J Krishnamurti, Shri Aurobindo, Osho, Swami Shivananda of Rishikesh etc. which made him more and more interested in diving deep into the quest of the understanding about the higher purpose of life. This led him to finally meet his Guru, Swami Niranjananda Saraswati (Bihar School of Yoga) there he got initiated in the tradition of yoga. Having spent years learning and experiencing Ashram life in his Gurus Ashram and various other institutions of repute such as The Divine Life Society Rishikesh, Shivananda Ashram Neyyer Dam Kerala, Swami Vivekananda Yoga University Bangalore etc., he eventually decided to bring his Gurus teachings to the world, by setting up the institutions for imparting traditional knowledge of yoga in it’s purest form. He now lives between Goa, India and Spain, teaching various teachers training courses, conducting retreats and teaching online yoga and meditation trainings to the seekers.

Isabelle’s conviction is that with a meal, we not only nourish our body, but also our soul. This also reflects in her classes and sessions as a holistic ayurveda nutritionist (REEA/HPS) and yoga teacher (E-RYT 500+h). Through her family in Mauritius she was initiated to lavish curry’s and the world of spices, yoga and rituals. She studied Social Anthropology and Film at the University of Zurich, Switzerland. After working as a journalist and film editor for magazines and the Swiss national TV, she followed her souls calling and founded the yoga studio Studio Yogisi. She lives with her husband and dog between two islands – Zurich and Mallorca.